The Grey Aliens are a species of intelligent extraterrestrial beings who visit and traffic on Earth. They are human-like with grey skin, large bulb-shaped heads and enormous black eyes. They also have long, thin fingers which they use to urinate. They wear clothes, travel in saucer-shaped space crafts and leave signs on corn fields, possibly a form of graffiti to purposely perplex human beings.


They appeared only in Scary Movie 3. 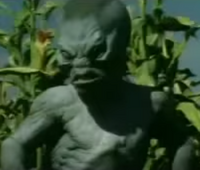 In a deleted scene showing an alternative ending for the film, the aliens are depicted as villains. They differ to the main film aliens in appearance, as they are shown to be mean looking with bulkier heads, darker grey skin and don't wear clothes. They also don't speak English. They attack the main characters, but they are defeated by George Logan when he transforms into a gigantic version of the Hulk.

Community content is available under CC-BY-SA unless otherwise noted.
Advertisement