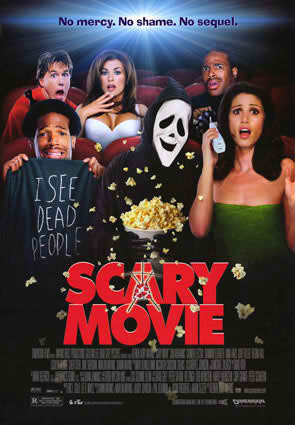 Scary Movie is a series of American comedy films created by Keenan Ivory Wayans with his younger brothers, Shawn Wayans and Marlon Wayans, that mainly specialize in parodying horror films.

The two main recurring actors of the series are Anna Faris and Regina Hall as Cindy Campbell and Brenda Meeks (2000-2006). They are also joined by new or recurring actors and characters in each movie. Scary Movie 5 was released in 2013.

Retrieved from "https://scarymovie.fandom.com/wiki/Scary_Movie_(series)?oldid=8991"
Community content is available under CC-BY-SA unless otherwise noted.